Developing programs in Apex that perform mathematical calculations can be tricky.  Even when you think that your calculations are error free, your unit tests pass, your functional tests pass, and your end users have accepted the calculations, you may still have errors but just not have tested with the specific data needed to cause the errors.  In this article I detail a few issues to be mindful of when developing calculations in Apex. 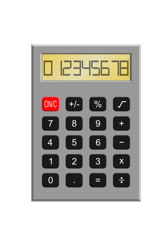 The two data types that can be used to represent real numbers (i.e., numbers with decimal points) are Double and Decimal (there is no Float). Doubles are 64-bit numbers that range from -2^63 to 2^63-1. Decimals have no bounds and can grow to any size, within the constraints of memory / heap.  Decimals are the Apex equivalent of Java’s BigDecimal.

For the most part, programming with Integers is straightforward, although care must be taken with division. Dividing one integer by another integer will yield an integer result and the remainder will be lost.  The remainder can be calculated with the Math.mod function in the Math class, though.  For example:

If you want to store the value of an integer division in a Double or Decimal you might be tempted to do something like the following:

That will result in d getting assigned the value of 2.0.  The Integer division operation is done with 5 and 2 which evaluates to 2.  That Integer 2 is then converted to a Double value of 2.0.  This type of implicit conversion is sometimes referred to as type coercion.

The solution is to explicitly convert one of the values in the division expression to a Double before the division operation is performed.

For example, you may have a simple algorithm that adds some numbers together and expects their sum to be a certain exact value, but it ends up not yielding expected values.

The above code is very straightforward. It simply add 0.1 to a sum 10 times which should equal 1.0. However, it ends up actually being represented as 0.9999999999999999.  This is due to the inexact representations.  If your code needs more accuracy, you should use the Decimal class.  Decimal should always be used for monetary calculations and Double should almost never be used for them.  Running that same code again, but with Decimal instead of Double, results in the expected behavior of the sum variable equaling 1.0.

The above loop can be rewritten to not use the pointOne variable, but instead use a constant of 0.1.

In this situation the assert statement passes and 1.0 equals sum.  The reason for this is that the type of a constant with decimal places in Apex is Decimal.  In the sum + 0.1 expression the sum gets promoted to a Decimal for a Decimal addition operation and the result is a Decimal which is then assigned to the Double sum. The lack of precision that would have been encountered with a Double addition operation is avoided because the Decimal addition operation is done instead. To reproduce the assertion failure with a constant, a Double literal must be used, which is achieved by appending a ‘d’ after the number.

Using Decimal does take care of many of the issues that can arise from using Doubles; however, Decimals are still not 100% full-proof for every use case.  Individual rounding errors can compound to result in undesired behavior.

Consider an investment application that allows users to invest money into a generic retirement account that is actually made up of different investment accounts.

A user may have a retirement account that is made up of three different investment accounts (X, Y, and Z) and have specified that each investment account’s share of any deposit should be determined by its current balance relative to the overall balance (i.e., its current percentage of the total). This seems pretty straightforward. The code might look something like the following, where the Balance__c, investmentsTotal, and depositAmount fields are Decimal’s out to two decimal places (i.e., currency).

This article described a few interesting aspects of performing calculations in Apex (there are many more).  More information about Apex and data types in Apex can be found in the Apex Developer’s Guide.