In this previous post I explained how I built an input rating Lightning Component using the jQuery Raty and the ltng:require tag. In this post I explore how that component can be used in a Visualforce page.

This gist contains the code from the previous post. The input rating component is shown below along with other ui:inputs in a form.  The form creates a Lead with the values entered on the corresponding Lead fields, including an integer rating (1 to 5) for the number of stars the user selects. 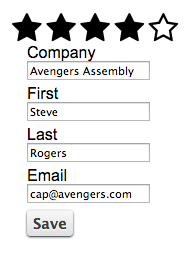 Adding the Component to a Visualforce Page

The documentation for adding a Lightning Component to a Visualforce page states that there are three steps to make it happen.

In my use case, I wanted to present the form to collect the lead information inside of a Visualforce page, so I first created a re-useable component, c:leadCollector, to encapsulate the form and the function of saving the lead. That form contains ui:inputText, ui:button, and c:inputRating components.

After that, the only extra code artifact I needed to create was the Lightning App responsible for declaring which components the Visualforce page uses.  The app must extend ltng:outApp. The <aura:dependency> component is the mechanism used to declare the dependencies, which also allows other resources that are not components to be specified. Note that if you do not declare the dependency and then try to create the component in your Visualforce page you’ll get a very useful JavaScript error (those do exist!) stating that the component wasn’t found, e.g., “Uncaught Error: No component definiton for c:leadCollector in the client registry – add <aura:dependency resource=”c:leadCollector”/> to c:leadCollectionApp.”

If you specify an app that does not extend ltng:outApp or does not exist you’ll get a 404 error when the framework makes an XHR request to get information about the app you specified. You can use Chrome dev tools to easily see the request that is made to retrieve the app information and the corresponding response. Example: https://yourDomain-dev-ed–c.na34.visual.force.com/c/leadCollectionApp.app?aura.format=JSON&aura.formatAdapter=LIGHTNING_OUT. You can also see the XHR request for the individual component that comes later. You can inspect the $Lightning object itself, etc. It’s interesting to poke around behind the scenes in that kind of stuff to see how it all works, but, obviously, don’t program against anything that isn’t in the API documentation.

The resulting Visualforce page contains the lead collection form and when the user selects a rating, fills the out the information, and hits the Save button a Lead is created exactly the same as if the leadCollector component was used outside of a Visualforce page. 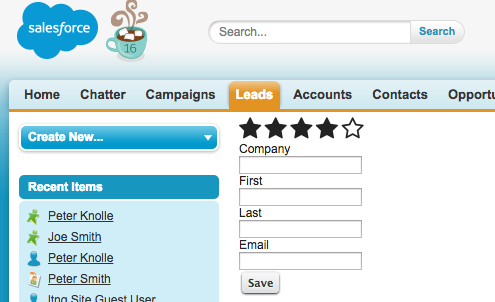 Passing Values to the Lightning Component

What if we want to initialize the form to have values of an existing Lead instead of the defaults that are set in the component definition? What if we want the component to update an existing Lead? That can be done with the second parameter to the $Lightning.createComponent function. In this case, the Visualforce page uses the Lead’s standard controller (i.e., standardController=”Lead”), so whatever Lead is in context will have its values populated in the component when it is created. Notice that the Id field has been added to theLead attribute’s initialization object, so that the component’s Apex controller’s upsert statement performs an update instead of an insert.

The other thing to note in the above code is that the values need to be the right type for the corresponding fields. The Rating__c field does not have quotes around it, because it is not a String. It is also set to be defaulted to 0. If the value was blank in the DB it would result in a blank being evaluated in the Visualforce page, i.e., “Rating__c: ,” which would result in an invalid object.  Similarly, the Id field is explicitly set to null instead of a blank {!Lead.Id} resulting in an empty string that would cause a field error on the save to the DB.

Alternatively, values can be set in the callback function, using the Component’s API.  For example, to set the email field from the callback it could change to the following.

13 thoughts on “Lightning Components in Visualforce”